And this is Georgia!!!

Well, you'd never know it from the weather, but I live in the southern US!!!  Most of last week our temps were extremely bone chilling cold, and then on Thursday into Friday we were visited by the 'Alberta Clipper' - an  Arctic cold front blasting through the US.  Brrrrrrr!

The snow began hours earlier than predicted, just after 1 PM on Thursday.  And it snowd, and snowed, and snowed!  Looks like I had the right flag hanging outside our front door, doesn't it? 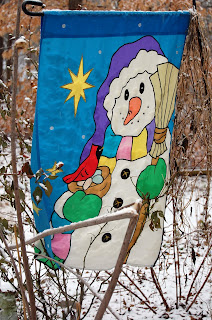 It immediately started sticking, I mean the ground had been frozen for almost a week by now!  By 3:15 I called hubby and suggested he might want to head home, but as it wasn't doing anything at his office about 32 miles away, he chose to stick it out and work until 'quittin time'.  The snow was beautiful, and a mix of what we call 'hominy' snow, or a pelletized snow, and big light fluffy snowflakes. 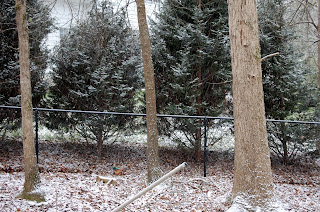 The back yard - aren't our neighbors Leyland Cypress trees lovely!


Now, here in the south, when we get snow it is usually a slushy, wet snow, so it doesn't stay pretty for very long, but this snow was a dry, crunchy snow, and it just stacked layer upon layer of pretty white stuff .  We ended up with about 1 1/2 inches or so, and it sure was pretty.  These pictures were taken Thursday aftrnoon, so what you see was only about 1/2 of the total accmulation. 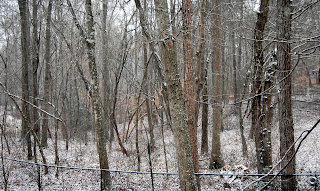 The woods behind our house. 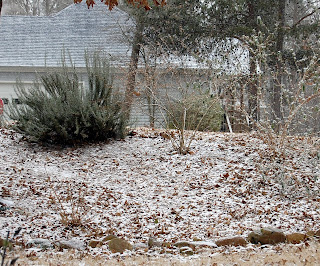 Hawaii.  That's what I call the big island out front!  Don't you love my rosemary bush?

Friday morning the roads in our subdivision were solid sheets of ice, so hubby stayed home all day.  If this is what it's going to be like when he retires, I'm not so sure I like it!  He was either 'playing possum' on the recliner, traipsing in and out of the snow, playing golf on the Wii, or bugging me ALL DAY!!!  He has GOT to come up with some interests before he retires - period!  BTW, it will probably be about 4-5 more years, thank goodness! 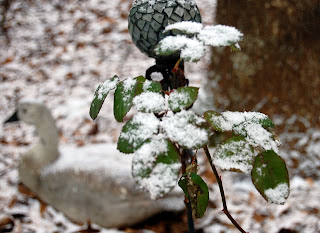 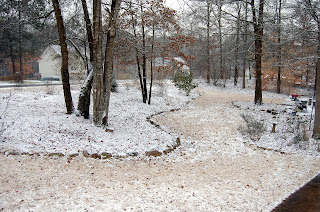 Another view of Hawaii, and a neighbor's house. 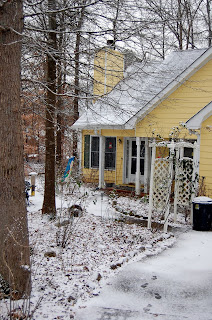 Then all day Friday and all day Saturday our temps didn't get above freezing.  Low temps were in the low teens, wit wind chill levels between zero and -5 degrees.  Yes, that is minus 5!!!  Some of the snow has melted where the sun hit yesterday, and now we have icicles hanging off the back of the house.  We probably won't be above freezing until tomorrow or Tuesday, but then by Wed. or Thursday we'll be back to more normal highs in the low 50's.

Today is the 4th day the snow is on the ground.  My Mama says that her Mama (Mama Medley) always said that if snow stayed on the ground for 3 days or more it was waiting for some more snow.  What do you think??? 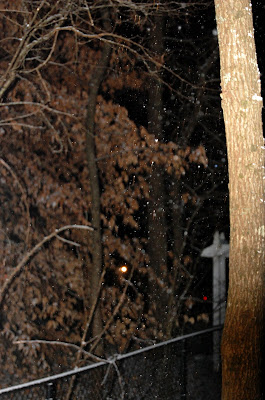 Late Thursday night pic taken with the flash.  I love that you can see the snowflakes falling!

I have to tell you that when it's cold like this, if I don't have to get out into the weather, I don't!  I haven't been out of our yard in two weeks, and while I'm beginning to get a little stir crazy, it's not been too bad!  I've had plenty to do, and have played a good bit with my new Cricut.  (Love it!  Check here for projects I've made using it!)  I even trusted hubby to buy a few groceries yesterday - things like milk, juice, potatoes, cheese, you know - the basics!  But on Wed. or Thursday I'm going to take Mama to run some errands and bring her back here with me for a few days, and she is planning on making me a big pot of homemade chicken and dumplings - yum!

So, what do you do to stay warm and dry and to occupy your time in this kind of weather???  Blessings folks!  Becky

Posted by Becky Garrison at 8:13 AM

I'm so glad I live farther south now. After the blizzard in '93 all I care about seeing is a few flurries. I went yeterday and bought me a warm coat and some boots. Last Sunday the heat was not working at church and I nearly froze. Steve and Lee gave me a wrap that you can use an afgan or you can put it around you and zip it up and snap sleeves in it. That is how I have been keeping warm. I get in my chair, get that around me, turn the fusion heater on and watch TV. I have to go today and get some seed for the poor birds.

Oh Beckey, I hear you. I took a pic, Thurs. Just as it started.We do not get to see this a lot so we have been kinda excited. The grands are having a good time. My dads church called off services today.I am kinda glad. In the morning hours it is still icey! And it is so cold! Brrrrr! Hope you have a great day! Blessings, Faye

Same here in Arkansas just to cold. The Bennie and I went to the mall yesterday it was snowing not many young people there lots of old people like us were. We each got a new coat.Great sell 1/2 off.
Patsy

Aw shucks, no snow for us below Atlanta. Our daughter's school was out due to ice on the roads. We waited in anticipation for snow but were disappointed.
Your snow pics are beautiful - thanks for sharing:-).

When you have a warm house and can stay in or go out at will, it's fun to enjoy a few extremes in temperature. Even down here in Florida, we are well below freezing each night this week. We have rugs over the well and leave the water dripping at night. A frozen well is a bummer.

Beautiful pictures, Miss Becky... but it's so c-c-cold here too! I'm ready for a little break in the freezings temps... I can't keep the ice out of the animals' waterers.
Stay warm... Spring isn't too far away!

We are camp hosting in Alabama, south of Tuscaloosa. There was no snow, but the lake did have ice on it. In Alabama!!

Our daughter had given us tickets to a concert and two nights in a swanky hotel in downtown Atlanta for 1/10 and 1/11, so we had to go, but we were freezin! Loved the pampering, but hope next time it is in spring or fall when it is not so cold.

i remember being GIDDY when it began a rare snow in the Atlanta metro! I so miss my lavender bushes....*sigh* it doesn't grow in MO like it did in GA.

I'm totally a HOT weather kind of girl. We haven't had any snow this year. In fact it was 54 degrees here the other day and my friend Becky thought that sounded like a heat wave. It was minus 7 when I talked to her and she thinks she won't even need a coat when she comes here. That is so funny! I only start to thaw at 80 degrees. The snow sure makes for beautiful pictures though!!